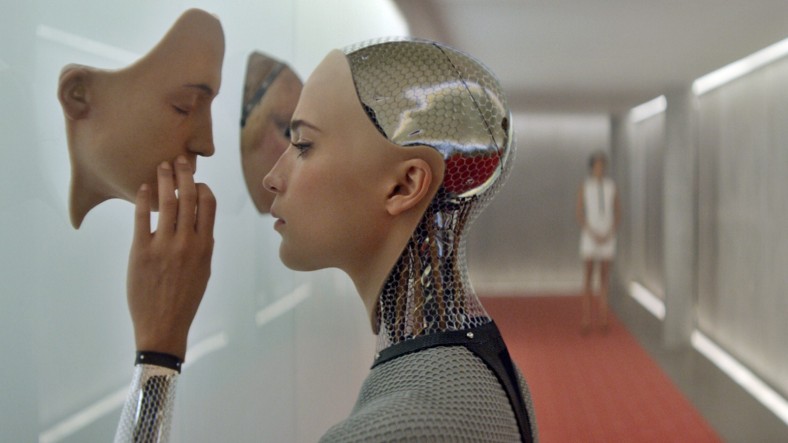 As I’ve shown with my previous article on Writing to a Future Artificial Intelligence, I’m on an artificial intelligence kick. And I probably will be for the next year, so I’ll be discussing AI in movies, games, and any other form of media fairly frequently.

Given my AI kick, I was excited when I heard about the film Ex Machina, about a young programmer named Caleb conducting a Turing test on an attractive artificial intelligence named Ava. I saw it this past weekend and it was very interesting and well worth watching. Even more interesting was the real-world Turing test the production company performed during SXSW.

In March, Tinder users at SXSW were put in the same position as Caleb by performing a Turing test on a robot named Ava on Tinder, I’m going to call “Tinder Ava”. Those who matched with Tinder Ava had a short conversation and then were directed to Tinder Ava’s Instagram account which was an advertisement for the film. In terms of the Turing test, Tinder Ava passed if users believed her to be a real woman and visited her Instagram account.

This marketing ploy drew some criticism from those who were duped into believing Tinder Ava was a real woman, and from people online who, after reading about it, felt the marketing ploy was deceptive and manipulative.

The exact same situation happened at SXSW as in the film.

Tinder Ava was a marketing ploy, but if the production company were going to use any sort of marketing ploy, a Turing test on a dating app was the perfect one. Not only did a Tinder marketing ploy fit Ex Machina in terms of a film about a female robot, but it fit the overall themes of artificial intelligence, the Turing test, deception, manipulation, and sexuality presented in the film. Had this Turing test been deployed on any other social media site, it would not have worked so perfectly alongside the film.

I’m not usually one to enjoy obvious marketing ploys, in fact I usually roll my eyes at them (like Carrie and Devil’s Due), but the Tinder Ava Turing test matched the Ava Turing test so perfectly that I have to tip my hat to the Ex Machina marketing department.